The implementation of arts programs in Ukraine and abroad represents a significant component of the International Educational Cultural Association’s (IECA) activities.

In 2009, the International Educational Cultural Association launched the International Charitable Arts Program “MASTERS OF BEL CANTO”. For many years the Program has been a unique and highly successful event. The list of its participants includes leading soloists of the Ukrainian National Opera among whom the People’s Artist of Ukraine, Taras Shevchenko National Prize Laureate Angelina Shvachka, Honored Artists of Ukraine Irina Semenenko and Susanna Chakhoyan, leading ballet dancers Kateryna Khanyukova, Yevhen Lahunov, and Tetiana Tsygankova, Honored Artist of Ukraine Konstantin Vinovoy and others.

The United Kingdom (in 2015) and Spain (in 2016) welcomed the international arts programs held under the title “THE POWER OF LOVE” with star performers, the people’s artists of Ukraine, Oksana Bilozir and Oleg Martsynkivskyi. ART PROGRAMS IN THE UK. 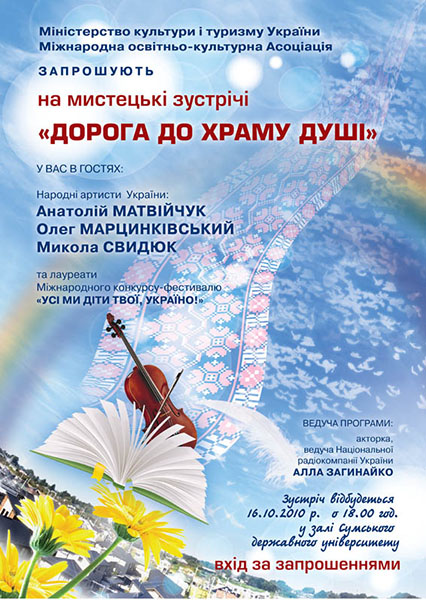 The year 2010 witnessed the start of the International Cultural and Educational Program “ROAD TO THE TEMPLE OF THE SOUL” initiated by the IECA. The program was aimed to teach to cherish the Ukrainian language and cultural heritage of Ukrainians, to support the development and use of the Ukrainian language, and to expand its application area, to form patriotism among Ukrainians, to develop intellectual and creative skills of the Ukrainian youth and of the representatives of national minorities of Ukraine, to teach the young generation to love their native land, and to tolerate and respect the languages and cultural heritage of other nationalities living in Ukraine. As a part of this program and with the support of the Ministry of Culture of Ukraine, the Forum of Intercultural Dialogue “ROAD TO THE TEMPLE OF THE SOUL” has been initiated and has been traveling across the cities of Ukraine since 2011. The Forum program invites students, socially disadvantaged individuals, large families and families raising children with disabilities, representatives of national associations to join the artist talks with well-known Ukrainian singers, composers, actors, and arts people. The participants of the cultural and artistic event are also offered to attend the exhibition of books published by Ukrainian publishing companies under the state program “Ukrainian Book”.

Events of the Forum of Intercultural Dialogue “ROAD TO THE TEMPLE OF THE SOUL” were held in the cities of the Kharkiv, Poltava, Chernihiv, Cherkasy, Zhytomyr, Volyn, Rivne, Transcarpathian, Ternopil, Odesa, Kherson, and Mykolayiv regions and in Crimea.

Also, the cultural events of the International Program “ROAD TO THE TEMPLE OF THE SOUL” were organized at the National Cultural Center of Ukraine in Moscow (2012), in the areas of concentration of Ukrainians in Spain (2015) and in Poland (2015). During the event, the Ukrainian publishers provided the libraries of the Ukrainian communities and Sunday schools with the books published under the “Ukrainian Book” state program.

The International Educational Cultural Association pays special attention to the support and development of the CHILD’S CREATIVITY. For that reason, in 2007, we started the International Competition & Festival of Children’s Creativity “WE ARE ALL YOUR CHILDREN, UKRAINE!” which over the years has brought together 10 thousand talented children from different parts of Ukraine and Ukrainians scattered around 16 countries across the globe.

During July 27-29, 2019, the All-Ukrainian Scientific and Practical Conference “Cultural Dominants in the 21st Century’s Realia. Primary Arts Education Serving as a Component in Raising the Individual’s National Culture Awareness by Means of Art” was held for the heads of art collectives participating in the finals of the International Competition & Festival. The Conference was initiated by the State Scientific Institution “Institute of Education Content Modernization” of the Ministry of Education and Science of Ukraine in partnership with the Ministry of Culture of Ukraine and the International Educational Cultural Association.

Particulars of the International Competition & Festival of Children’s Creativity are available on the IECA’s YouTube channel.

PHOTO GALLERY of the International Competition & Festival of Children’s Creativity “WE ARE ALL YOUR CHILDREN, UKRAINE!”
Please REGISTER for more information about participation in our ARTS PROGRAMS:
Close Menu